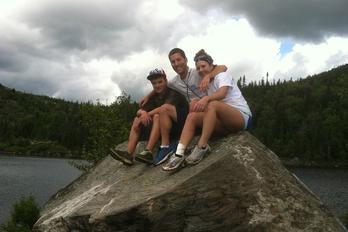 We each packed what we wanted to bring and I as thorough as always, packed more than I could ever possibly need. But if a bear comes at me I have my walking stick for a clunk in the head, a straight blade for some slashing Daniel Boone shit, but the last resort is to just throw a kid at it and run like hell.

We started driving in my truck and it was turning out to be a little longer ride than we had guessed, especially when we hit the detour. A small town had a blueberry festival in the middle of town with the only road around twenty miles out of the way. On the dirt road on the final leg of the journey we see a white windowless cargo fan parked in the woods. I was glad I had my knife.

We finally arrived at the trailhead and we gathered our gear. I look around and I am the only one with a backpack and end up carrying everyone’s water. So I’m with a bunch of kids and I’m the pack mule. I am bringing up the rear and tell the one in front to watch for trail markers, you should always stay with the trail markers.

We are about an hour in and we come up to a blue rope dangling from a fifty feet cliff above. “Wait a second, what the hell is this?” I ask. “This can’t be right.”

“Sure it is,” says Jack, who is fourteen, and he starts hauling himself up to the top. Next goes my daughter then Matt. Finally I go with my ten bottles of water, walking stick, knife and god knows how much trail mix. I get to the top and look around. There is nowhere to go.

“Where the hell are we going now?”

“Over here,” yells Jack standing in front of a second cliff we would have to scale like friggin Spiderman.

“Wait a second; we’re not going up there.”

“How the hell do you know? You can’t see anything beyond that point. It could be another cliff. Where the hell are the trail markers?”

“The ones telling you to scale this cliff! You show me a marker and I’ll go up.” The kids walk back and forth along this cliff looking for a marker. Big f’n surprise, no markers. “OK, we are going back down the damn blue rope and going to keep going down until we find a marker.”

All of them, looking rather dejected, began to scramble down the rope. This happened to be much trickier going down than it was coming up but we all made it. We began retracing our steps and about twenty yards later Leah says, “Here is the trail marker,” she points and starts laughing.

“No shit, you two pay attention if you’re going to lead.”

The rest of the hike was nice. We came back down on a more gradual section but

behind us were 8 teenage girls that were disturbing the peace and our sanity. I have never heard so much giggling and carrying on in the woods since, well never mind but it’s been a while. We got to the bottom and realized that our trailhead was two miles up the dirt road. We began to walk now getting quite tired. We decided to thumb hoping not to be picked up by a windowless van, I still had my knife. Fortunately a truck pulled over and we all climbed in the back for a ride back.

On the ride home we see a baby cow in the road. My son always the most mischievous says, “Dad can we put him in the back of the truck.”

“No we are not bringing home a baby cow.”

My daughter says, “We can’t just leave him wandering around the street.” So we pull over and find that the cow has somehow escaped its pen so we lead it pack in. The whole time I’m looking around for someone carrying a banjo and a shotgun but fortunately we did not encounter anyone.

All in all it really was a pretty good day!

Submit a review of "Tumbledown"

We woke up and began our Journey to Tumbledown Mountain to climb what was supposed to be a nice climb. The troop was led by Leah my oldest daughter, my middle daughter’s boyfriend Matt, my youngest and only boy Jack and the old guy bringing up the rear was yours truly.